Following on from the first post titled ‘Five Australian startups to watch‘, I’ve now researched some more startups that’ve piqued my interest coming into the New Year. Part of this series is to highlight great stuff happening in our community and to bring awareness through link love to those innovating and creating in Oz. As per my last write-up, I’d like to stress this list is independent – I’ve only met two founders below and pick startups based on a loose-‘watchability’ criteria. So without ado… 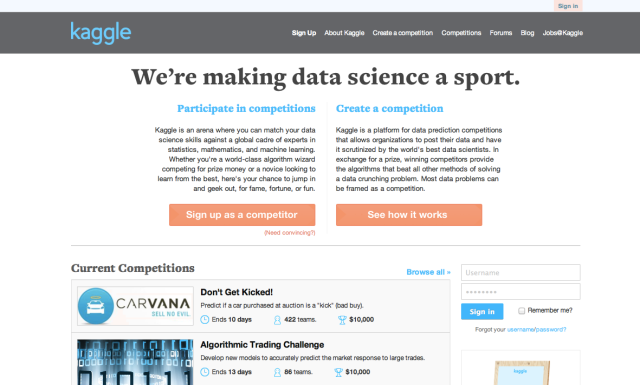 You know you’re off to a good start when a company has a CrunchBase profile! Here’s Kaggle’s. Last month, the now-SF-based startup raised $11 million in Series A from Index And Khosla Ventures – a promising and hefty amount for an Australian startup. Founded in 2010, this site hosts competitions to find analytical/statistical and predictive modelling solutions. Not dissimilar in concept from the multiplying logo-contest sites, Kaggle rewards big data scientists with thousands of dollars in exchange for the IP they provide on the challenges. Unless you’re a PhD from a quantitive field or in need of access to the collective Kaggle community brain, it’s unlikely you’ll ever use or take notice of this startup on a consumer level. Brands like Nasa and Microsoft will and do though.

Pygg is a recently-launched app based out of Pollenizer in Sydney that allows you to pay someone in a fun and social way. It’s quite simple – after you’ve registered with Pygg and integrated with PayPal, you can pay another user via Twitter and email. The service currently charges $2.50 (inc. GST) when you fill up your account, which is just a little more than the PayPal fees – it’ll be interesting to see how the business model evolves over time.

Following in the collaborative consumption style mainstreamed by the likes of Airbnb, Open Shed is a peer-to-peer marketplace allowing people to rent stuff off each other. The wheels were set in motion a year ago today after one of the founders saw #collcons leader Rachel Botsman give a talk at TEDxSydney and referenced such sites in the US and UK. Seeing the opportunity for a local equivalent, Open Shed launched a few months ago and has since won $10K from Nokia’s In Hindsight competition. It’ll be interesting to see how the concept goes since we’ve seen rental sites before in Oz through Rentoid and one of Angel Cube Melb’s startups has moved from renting to tasks. 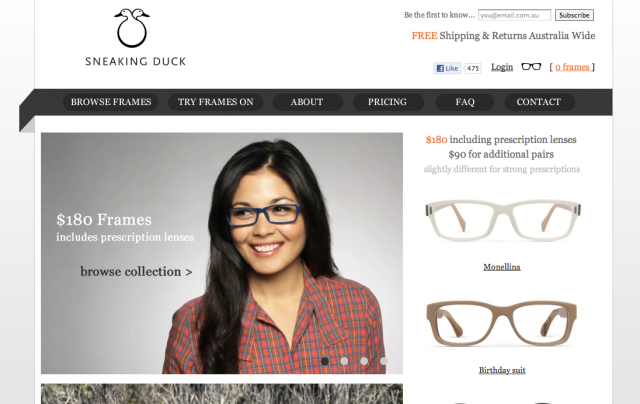 Recently launched by the founders of Shoes of Prey, Sneaking Duck follows a similar online retail trajectory – this time as a glasses and eyewear version. I know what you’re thinking, who buys glasses without trying them on first and making sure the prescription’s right?! Well, the ex-Googler team have successfully done it before with hard-to-fit shoes and seem to have most things covered in their FAQs. These guys also know how to bootstrap, check out this informative post on funding as well as some of the other golden tidbits on their blog. Oh, and as the popularity of non (plano) lenses is proving, you don’t even need imperfect vision to get a pair!

When I was in Berlin this year, I met up with the Ashton- and Madonna-backed app Amen, which touts itself as the best and worst of everything. So when I first saw the Melbourne-based Barkles, I thought it might be similar in the way that a user posts something other users agree or disagree with. However Barkles is predominantly web-based and allows for lengthier discussion on each statement. While some of the more accessible ‘dogfights’ like ‘Is Glee shit?’ or ‘Is Christmas a horrific, commercialized excuse of a celebration?‘ get your attention, in-depth and highly-engaged debate could make this site a long-term player. Add a bit of Quora’s tone to it and you’ll have something really powerful in this space.

P.S. Please feel free to rejuice this post when people are back at their desks mid-January.