Last month I was lucky enough to check out the creative and digital scenes in Berlin as part of the Grand Tour. As a city with a gay mayor, in a country with a female chancellor and a polarising past, I knew I’d like it. I started researching before I landed and was soon surprised, not to mention rather excited, with the sheer volume of stuff happening. Unlike San Francisco, which tends to be a bit tech-community myopic – I found the beauty of Berlin lay in its diversity. You’ll find more artists, vintage store owners, local-movement foodies, late-20’s students and pop-up venue instigators than tech entrepreneurs. It almost reminded me of Melbourne but about five times less expensive. That’s right, you can find rooms as cheap as €200 per month so it’s definitely an attractive place to startup. Plus, you can always squat for free – it’s the Berlin way. ;) However, salaries are adjusted to the affordable cost of living. One of the sticking points of Berlin is the comparatively low remuneration – if you’re thinking about staying long-term, be prepared to be greeted with a salary of what’s often less than a graduate in Australia.

Something important to note is that German web workers are moving toward doing most business in English, so don’t be afraid if your speaking skills are non-existent. There were people I met who’d lived there for three or four years, and still couldn’t pull out more than a danke schön. Berliners are also really passionate about their craft and it won’t take you long to figure out if a product was founded in the city.

Now for some background reading…

First up, don’t think Germany is all Samwer-esque US clones – there’s a lot of progressive stuff happening and the German community is keen to embrace an “anti-copycat revolution”. One of the must-read posts, which is now a few months old, is Founders STAND UP! The anti-copycat revolution starts now.

It also features a neat visualisation of original startups and their HQs: 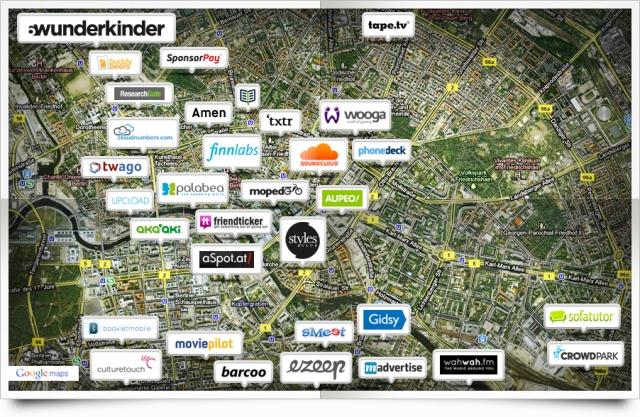 There are also two local content offerings doing a stellar job of covering the community:

I ended up getting to my fair share of events. Hello Etsy was a special summit on small business and sustainability, and featured the best name tags ever. CoHackDay at coworking space co.up was a fun cross-discipline hack weekend. Hack and Tell was a nice insight into what’s being created, with monthly demo evenings. The social business innovation conference, CoThinkTank was a more-corporate style event and I particularly enjoyed hearing from frog design. Fatsix by Third Wave Berlin was a chilled weekly Friday drinks event and finally, Open Coffee Club was a #socialmelb-style coffee meetup but with more males and tech entrepreneurs! I also couldn’t help myself, I ended up coorganising something while there via kicking off Berlin Travel Massive.

When you hear the word ‘cowork’, think Berlin. Due to the low rents, less-stringent building regulations and mid-rise properties in abundance – there are countless places to work out of. The city is also home to the best online coworking publication going, Deskmag where the editors work out of the co.up space. They also created the useful Deskwanted, which is a marketplace for desk hunters and coworking spaces. Worth the view if you looking for something in one spot.

Like coworking, you won’t have a problem finding accommodation in Berlin. A quick Airbnb search will list many extremely affordable and hip options. I ended up staying at the super kind and friendly Ferdinand‘s place, which is only a few U-Bahn stops from Alexanderplatz (central).

You can also check out Airbnb-clone Wimdu for more listings.

In Berlin, gentrification is an ugly word so there are locations to stay in and there are locations to stay in. I’m trying to keep up with what’s what but let me just say, Berliners are pretty evangelical toward their suburb and prefer not to travel across town. If I have it right, Prenzlauer Berg was the place before it became baby town. So now it’s Kreuzberg, which is likely to be replaced by Neukölln. But alas, it’s mostly fun and games – I can tell you most places will be cheaper, cooler and closer than you have at home.

Startups to meet, people to remember

While there are always so many people to see and startups to talk about, I’m going to keep this quite brief!

Now for some specific people:

Away from it all

Now finally, if you want to get out of the city and switch off – here are three non-web activities:

So, that’s about it for Berlin. Oh, I nearly forgot the most important thing – don’t forget to eat lots of scrumptious German bread!

Apologies in advance if there’s anything or anyone I’ve missed. This post is a bit of a WIP and will likely be updated.

Would love you feedback on the usefulness of this as an introductory guide to Berlin too. Email me or leave a comment.